I’ve written three of Cleo Howard’s Diaries. These were so much fun to write and I had to drink Malibu for research purposes. Teen angst is much more fun in your forties than it was at the time. These are the available Cleo Howard titles; 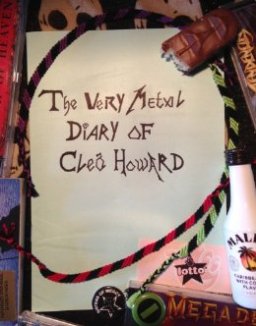 The year is 1997. Cleo Howard is at a very awkward age, she’s sure she’s an adult, so why won’t everyone realise this? Why won’t her chest realise this? Why is maths so hard? When will she stop feeling sad that her dad doesn’t live with her and her mum? Music and men are her twin fascinations and she thanks Almighty Lemmy for metal and mates. Her diary, which you now hold in your hands, is home to her deepest thoughts, fondest wishes and often what she had for tea.

The year is 1998. The location is Reading, England. Cleo Howard is almost sixteen years old. It’s going to be a big year. By the end of it she’ll have seen Black Sabbath and Slayer, sat her GCSEs, been alone with a man and Opal Fruits will have been renamed Starburst. It’s a time of great change. Cleo is lucky to have her constant companions Ian and Jenni to help her weather the storms of her world.

The year is 1999. The location is Reading, England. Cleo Howard is almost seventeen years old. Her primary concerns are sex, clothes, music, going to the pub and bosom growth. She’s studying for her A Levels and is getting to grips with Sociology. She is regretting Biology. Despite this, it’s going to be an exciting year. By the end of it she’ll have seen Metallica, Ministry, Marilyn Manson, Venomous Lizzard, Napalm Death and Type O Negative. She’ll have had sex in the same room as other people. She will have fought the feminist cause while on a field trip. A new shopping centre will open in her home town but she will prefer Camden. Luckily Cleo will have her boyfriend Barry and her constant companions Ian and Jenni to help her weather the storms of the end of the millennium.

They can be purchased from Amazon.co.uk.

My author page is http://www.amazon.co.uk/Sarah-Tipper/e/B00A8Z5OVC

For those people who would prefer a smaller bookseller, you can buy from here http://www.fast-print.net/bookshop