My first novel Eviscerated Panda A Metal Tale is free on Kindle this weekend (19th and 20th October 2019).

Here’s the blurb: Eviscerated Panda are a newly formed thrash metal band. They are the brainchild of ageing lead guitarist Phil Winter. They represent his big hope for regaining his former musical self-esteem and his luck with the ladies. Phil had to hastily exit stage left from his last band when his dalliances with the drummer’s fiancée were discovered.
Young singer and underachiever Nick loves the band because it provides an escape from his dull job in a supermarket. For rhythm guitarist Ian it’s all he’s ever wanted to do. For bass player Jim it’s a pleasant hobby, at least to begin with. For drummer Paul it’s a step up from being in a covers band and a sometime causer of arguments between him and his wife.
A band is much more than just the musicians in it, it’s a whole ecosystem. A female perspective is given by close friends Cleo and Jenni as the Pandas play to and hang out with an audience comprised of friends, fans, wives, girlfriends, future girlfriends, lovers, promoters, other bands, interested spectators and uninterested spectators. After a nervous first gig in their native Reading they play in Swindon, Coventry, Oxford, Dudley, Brighton, Birmingham and Camden. In between gigs they mostly go to the pub, eat biscuits, record an E.P, read a girl’s guide to heavy metal written by Cleo, practice and make grandiose plans for their future. Occasionally they get laid. Even more occasionally they get paid to play. 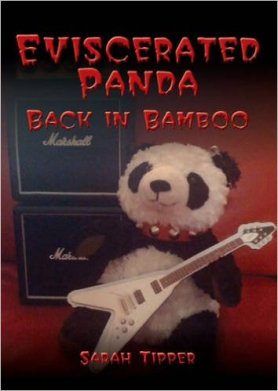 Also free today is the sequel, Eviscerated Panda Back In Bamboo. Here’s the blurb: Eviscerated Panda – Back In Bamboo is a book that meanders around the topics of heavy metal, happiness, sex, morality, love and biscuits. It follows the lives of keen for success metal band Eviscerated Panda and their friends, families and lovers over a four month period. There are chance meetings with old band mates, birthday celebrations and career aspirations.
Eviscerated Panda play loud gigs in Camden, in Coventry, in their home town of Reading and in Torquay. They have to cope with the temporary closure of their favourite pub, the Green Man, which is the scene of much of their carousing. Ian has trouble in his life of love while Dean and Lucy are getting started on theirs, if only his Mum would give them a minute of privacy. Suzi does a rude thing in a dressing room suitable only for mature readers.
They go to see the inspiring kings of metal, Manowar. They play an April Fool’s day joke on their fans. Some of them wake up in a room that smells of onions. The book ends with the Pandas playing on the same bill as Nightshade Milkshake, the band that lead guitarist Phil was in before he made the Pandas happen.

Today and tomorrow (9th and 10th June) I’m offering two of the Cleo Howard diaries free on Kindle. They are usually priced at £1.99 each. They were a lot of fun to write.

The first in the series is The Very Metal Diary Of Cleo Howard 1997. 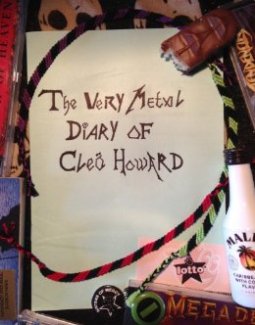 Here is its blurb: The year is 1997. Cleo Howard is at a very awkward age, she’s sure she’s an adult, so why won’t everyone realise this? Why won’t her chest realise this? Why is Maths so hard? When will she stop feeling sad that her Dad doesn’t live with her and her Mum? Music and men are her twin fascinations and she thanks Almighty Lemmy for metal and mates. Her diary is home to her deepest thoughts, fondest wishes and often what she had for tea.

You can download it from Amazon at  The Very Metal Diary Of Cleo Howard 1997.

The second in the series is The Mega Metal Diary Of Cleo Howard 1998.

Here is its blurb: The year is 1998. The location is Reading, England. Cleo Howard is almost sixteen years old. It’s going to be a big year. By the end of it she’ll have seen Black Sabbath and Slayer, sat her GCSEs, been alone with a man and Opal Fruits will have been renamed Starburst. It’s a time of great change. Cleo is lucky to have her constant companions Ian and Jenni to help her weather the storms of her world.

You can download it from Amazon at The Mega Metal Diary Of Cleo Howard 1998.

I wish you lots of happy reading this summer and would be delighted if one of the books you read is written by me!

I’ve written a book of 24 short stories about Christmas and made it free to download on Amazon until May 15th 2019. Just use the links below if you’d like a copy (links open in a new window):

Tales to Take You to Christmas UK link

Tales to Take You to Christmas US link

It is also free on all the other Amazon sites.

I got the idea for the book when I was looking for an unusual advent calendar for my mum. I decided that if I wrote 24 short stories, it would be an advent calendar in book form.

I took inspiration for the cover from a page of one of my favourite Ladybird books. Ladybird books are some of the first books I read. My dad used to bring me one home on a Friday night when he got paid. He inspired my love of reading and my love of Christmas. All of the decorations used for my book cover have hung on either my parents’ or grandparents’ Christmas trees when I was a child. 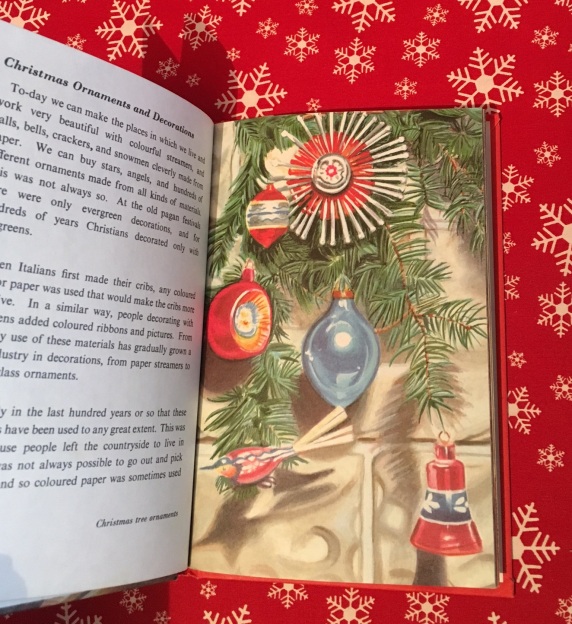 Below are the first pages of four of my Christmas stories.

Today (Sunday 7th October 2018) you can download a free Kindle copy of The Very Metal Diary Of Cleo Howard 1997. It’s a 222 page time machine full of things you might have forgotten. I loved writing it and I love the intimacy of the diary format.

The heroine, Cleo Howard, is a full on metalhead and a girl who likes to have fun. Like most teenagers, adults keep trying to rein her in.

Here is the start of July, August and September. I hope some fond memories get jogged. 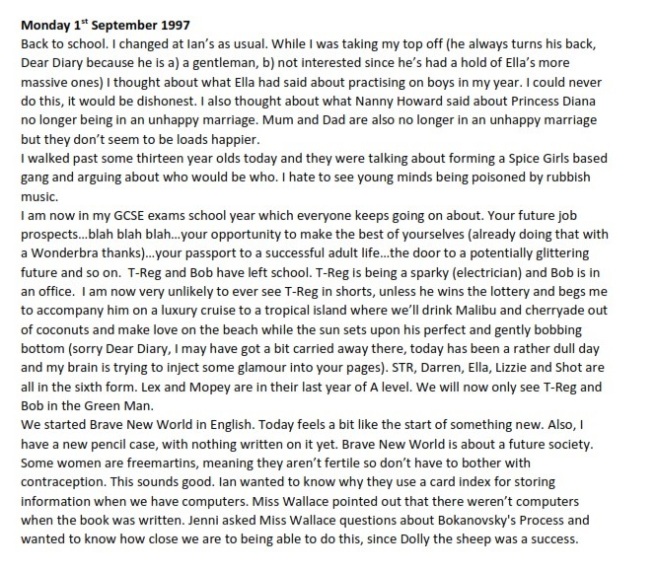 This weekend you can download a free ebook of The Very Metal Diary Of Cleo Howard 1997. It’s a voyage backwards to when mobile phones were new, we were dialling up the internet if we were lucky enough to have it at all and Cadbury’s were still making the Spira.

Here is the start of January, February, March, April, May and June. I hope some fond memories get jogged.

Some people like to download the book just to read whatever the entry was for their birthday! Happy reading and thank you if you have chosen to pop back to 1997 with me.

I’ve written a book of 24 short stories about Christmas and made it free to download today on Amazon. Just use the links below if you’d like a copy (links open in a new window):

Tales to Take You to Christmas UK link

Tales to Take You to Christmas US link

It’s got all my love of Christmas in it! It can be used as a readable advent calendar if you read a story per day from the 1st of December.

I ho ho hope you enjoy it!

The Very Metal Diary Of Cleo Howard 1997 is free on Kindle* until the end of the month.

It contains the thoughts of fifteen year old Cleo, who is growing up in Reading in the 90s, loving metal, disliking the Spice girls and being fascinated by boys.

I like the idea of this book going on holiday with people! If you do read it somewhere exciting I’d love to hear about it.

It is also free on other countries Amazon sites, just search for the title and it will appear.

*You don’t need a Kindle to read the book, you can also get a Kindle app for your phone or tablet or use Kindle for PC.

Kindle for iphone and ipad

Two of my books are free on kindle until the 6th March. It may seem odd having a free Christmas book offer in March but a few people have said to me they didn’t have time to do much reading in December.

Use this link for a free Kindle copy of Eviscerated Panda A Metal Tale (link opens in a new window) https://www.amazon.co.uk/Eviscerated-Panda-Metal-Sarah-Tipper-ebook/dp/B007XVMI9U

Use this link for a free Kindle copy of Tales to Take You To Christmas (link opens in a new window) https://www.amazon.co.uk/Tales-Take-Christmas-Sarah-Tipper-ebook/dp/B0138YIUH4

The year 1997 is now 20 years ago. Some of my old T-shirts have become vintage classics. To celebrate, The Very Metal Diary Of Cleo Howard 1997 is free on Kindle from 1st to 3rd January 2017.

It’s also on Soundcloud as an audiobook:

And I can be seen reading it on Youtube:

Tales to Take You to Christmas is 24 short festive stories. You can read a story a day and use it as an advent calendar or read it all at once and immerse yourself in a seasonal world.
Ho, ho, how much is it? You might be asking. It’s free on Kindle today and tomorrow 🙂