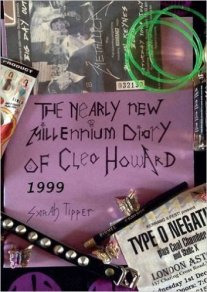 I started reading Introducing Feminism from the library. A photo fell out. It’s of a man in white trousers and no shirt, stood in a living room in front of a brown sofa. There are orange curtains in the background. The photographer has accidentally cut off the man’s head. The man has a massive stiffy! You can see the outline clearly through his trousers. I’m using it as a bookmark.

Mum bought tinned corned beef and Spam home from work today but didn’t buy any sweets. This is poor household management (Jenni’s Mum Pam says household management should be taught at school). Mum denied she is making a long life food cupboard, as recommended by an unhinged guest on Richard and Judy. We already have loads of cheap slightly dented tins.

I suppose the photographer might have been distracted by the stiffy and so cut the head off the man in the photograph by mistake or maybe she or he only wanted to remember the stiffy. Maybe they didn’t realise the stiffy until they got the photos back from Boots or Truprint or wherever. It’s a mystery as well as a bookmark. When I take the book back I might leave it in, but then it might fall out and the librarian might think it’s mine, or maybe a feminist will borrow the book after me and think it’s a plot by anti-feminists to make feminists look at dicks.

The new Red Hot Chili Pepper’s album Californication is on the Green Man jukebox. Ella likes it. I don’t. It’s slow and bland. It sounds like trying to eat a whole loaf of white bread with no Nutella on. Ella looked different tonight. She said Craig doesn’t like her wearing loads of make-up and a Wonderbra. She is meeting him from work. Lizzie asked her tonight why she is going out with him. Ella said he’s good in bed. She wishes they didn’t work together though. When she was on her break yesterday he said she’s getting fat on pizza and they didn’t speak to each other until the end of the shift. Shot said someone she works with in Woolies asked her out but she said she had a boyfriend and since then he won’t come and help her on the till. Another man keeps making rude comments about her bum when she walks past him. She wants to tell him to fuck off but he’s one of the supervisors. It is hard for women in the workplace according to Introducing Feminism and it seems that in actual life in Reading women are being undermined in the labour force. I wish I knew what to do about this. Maybe I will by the time I’ve finished Introducing Feminism.

Ian, STR and Ryan are having band practice tomorrow. They still need a bass player.