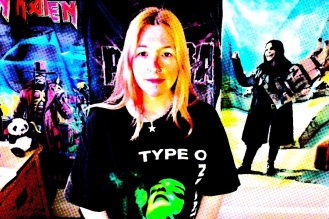 In honour of today (22nd May 2017) being World Goth Day here are some extracts from The Very Metal Diary Of Cleo Howard 1997 that feature the word “Goth”.

I realise, Dear Diary, I haven’t introduced you to people who were at the pub last night. Ian and Jenni are my best mates at school. Jenni is the only Goth in our year. She’s tall and smart and beautiful. Ian is tall and I suppose he’s handsome but I don’t see him that way. Ian and Jenni keep me sane when Mum is arsey (a long sad story Dear Diary, involving a marriage split). I actually rather like school (except Maths and P.E.) because I get to see my mates. Bob and Simon The Raspberry are metal heads in the year above me at school. It’s interesting knowing older people. Last year I didn’t know what a blow job was so Bob demonstrated using a banana. I still can’t look at a banana without blushing but at least I will never be in the embarrassing situation of actually blowing now I know that this is not what you do. Simon gets his name because he spits a bit when he speaks (only a teeny bit, nothing like the Roy Hattersley Spitting Image puppet) and when he was overexcited once he made a raspberry noise.

I took the Christmas decorations down today. This is always my job. Before Mum and Dad separated me and Dad used to put up and take down the decorations together. Mum used to make mince pies for us when we put them up and bacon sandwiches when we took them down.

One of the tiny shiny red parcel decorations with gold ribbon wrapped round it came unravelled when I was undecorating today. I was fascinated by these pretend presents as a child and I wondered what was in them. It’s a block of polystyrene. That’s another one of the mysteries of childhood that turns out to be disappointing, like the day I found out Sylvania is a real place but isn’t populated by cute animal families, just normal people or like the day I found out what Dad was hiding on top of the wardrobe (my suspicion was sweets) and it was just some playing cards with pictures of ladies in their bra and pants.

I went to the Green Man pub with Ian and Jenni. The way it works Dear Diary, is that we turn up wearing lipstick and smoking and no-one doubts that we’re eighteen because we appear to be so confident. Well, Ian and Jenni appear to be confident, I just follow behind them. Both of them look older than their age because they’re tall. We don’t draw attention to ourselves and no-one questions us. We don’t get too drunk or too noisy so we aren’t a nuisance. I’ve seen people get kicked out for this. It seems to me that you can do what you want so long as you do so discretely, so I don’t go boasting about having been to the pub, I just quietly go about my business.

We often see the metal heads from the year above us or the Goths from the sixth form. All the metal/goth/punk people at school sort of talk to each other or at least nod at each other, regardless of what year they are in. It’s like an invisible bond. The Green Man is a rock pub so it’s full of cool people and has no townies or trendies to bother us. They have their own places, whose door I wouldn’t darken for fear of hearing rubbish music.

Tonight Bob and Tyrannosaurus Reg were out. Reg is so much hotter than you would think based on his name Dear Diary. I wish I had a photo to show you. I think he’s the best looking boy in the year above, but Jenni thinks it’s Darren “Dazza” Baskerville.

It was so hard to get out of bed today. I wanted to stay in my cosy sleep fog. If it wasn’t for Mum shouting up the stairs and for Slayer’s “South of Heaven” I’d never have got upright.

Some twats at school today were going on about how great ecstasy is and how Brian Harvey shouldn’t have got kicked out of East 17 for taking it. Frankly I don’t care how East 17 end, just so long as they do.

Meanwhile, I’ve got bigger stuff to think about, should I dye my hair blonde? The Great Kat looks amazing. Ian said she gives him a stiffy of epic proportions. He thinks she would give the best hand jobs in the world because of her guitar virtuosity. I said maybe she’ll tug him off and record his grunting noises and squeals of pleasure as a track on her next album.

Lex and Mopey Dick spoke to me and Jenni today. They are in the sixth form and are Goths. Jenni fancies Lex even more than she fancies Dazza. Mopey needed to borrow some eyeliner. He said he felt naked without it. He talks really slowly, like just being alive is an effort. He sounds a bit like a record played at the wrong speed. His proper name is Richard Rippingdale and he tried to get everyone to call him “Ripper”, which is a very good Goth name, but instead every calls him Mopey Dick, which suits him well.

A beautiful man and a wonderful guitarist #Hendrix
Christmas decorations still up in this kebab shop 🙂
In a delightfully dingy club waiting for some blues to happen 🙂 #popachubby #the1865 #southampton
The sort of thing that happens in January #lastchocolate
Two of my books are free on Kindle today 🙂 #reading #freekindlebooks #metalmusic
Snaggletooth is eating a fancy KitKat this #motorheadmonday 🙂 #feedingthingstosnaggletooth #kitkat
%d bloggers like this: