Saturday morning dawned bright and sunny in Evesham. My husband and I had spent the night in single beds due to a slight mix up when booking. The Terminus camp decided to seek out a fry-up and were successful in the Old Swanne Inn Wetherspoons. We were the loudest customers and the ones wearing the least beige. I chose pancakes with maple syrup. They were microwaved to near perfection. Next we did a lot of standing about in a car park. It’s not a proper tour if you don’t do this. We then began a drive from Evesham to Wolverhampton. It’s the first time in Wolverhampton for three-fifths of Terminus and for me. I’m keen to see the sights because I love the TV series Raised By Wolves.

Here’s a quote from Della, the Mum in Raised By Wolves; “Underage clubbing was the making of me. If I hadn’t vomited my guts up on cheap cider night after night and been punched hard in the tit by a Goth in a mosh pit I wouldn’t be the woman I am today”.

Also, Wolverhampton has got some great rock history. Tyla (Dog’s D’amour, Spike & Tyla’s Hot Knives, The Tyla J. Pallas Band) hails from Wolverhampton and Noddy Holder has an honorary degree from the University of Wolverhampton.

“Out of darkness cometh light” is the city’s motto. While I was there it was mostly darkness and rain so I did minimal sightseeing.  I saw the view from the hotel window (of a skip, a roundabout and a funeral directors), a Betfred, a pub called The George Wallis, and the splendid venue The Giffard Arms. I’m making a promise to myself to go back to Wolverhampton and do it properly one day. 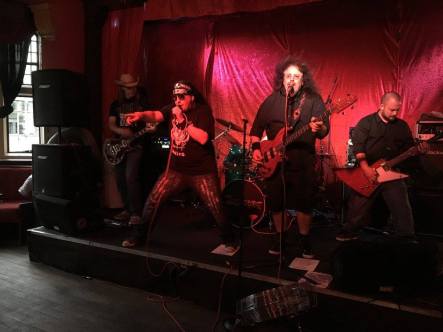 Terminus kicked off Saturday night by playing a set of classic partying tunes. It’s the Zodiac Mindwarp “Prime Mover” cover that does it for me time after time. The intro is amazing. I’m with Dean as he proclaims “We shall be drunken stars, we shall fear nothing, demand the impossible, dream your destiny” and then he gives us “defy the logic of alphabets” and I start wondering how I’d write anything without an alphabet. But he’s carrying on with “I slayed the king of the wolves, nothing is impossible” and then I wonder if the wolves have a new king now, since it must have been about 1988 when Zodiac Mindwarp first slayed him.

Next I witnessed the hair magic happen for Neil of the Sykko Dollz. The awesome hair stylist Alex Barker soon had Neil’s mohawk stiffer than a gin with no tonic, more upstanding than a 1980s teenage boy with the Kays catalogue open on the underwear section, and greener than an apprentice who goes on an errand to buy tartan paint. Sykko Dollz look great onstage against the red velvet curtains. Gaz’s contact lenses add an otherworldly edge to his face. It’s my third time seeing the Dollz and I’ve moved closer to the front since Thursday and started singing along with all the choruses. The Dollz faithful are out in force and are a very friendly bunch. 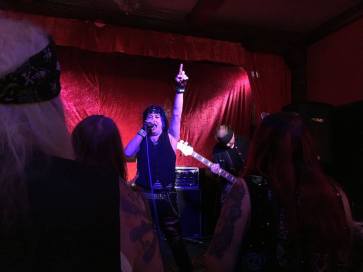 Headline act Stone Trigger are full of class and professionalism tonight. During a minor mike issue Tommy leads a singalong of Bon Jovi. He doesn’t lose the crowd for a picosecond. He moves about the stage constantly, letting everyone in the room get a look and a listen. This band are superb at songs with the noise “woah-oh” in. You need this kind of music on a Saturday.

It’s hard to leave the venue because it has everything there should be in a pub; great music, friendly bar staff, JD Honey, the traditional installation in any pub’s ladies’ loo on a Saturday night of a woman assuring her mate she isn’t going to text her ex later.

The ladies’ loos in The Giffard Arms have cubicles with doors marked Goddess, Vamp and Mistress. I was going to go in Goddess but went in Vamp because there was tiny bit of sick in Goddess. Emmy went in Goddess when it was clean. I wonder which is most popular?…

The gig in brief

Most disturbing sentence of the night: “We’re not taking orders because our chef has to go out”. I nearly got hangry.

Number of Motörhead T shirts in the venue: 3.

Number of Elvira pictures in the venue: 1.

Number of crisps flavours available behind bar: The bar had sweets and crisps available. Sweets top trump crisps any day.