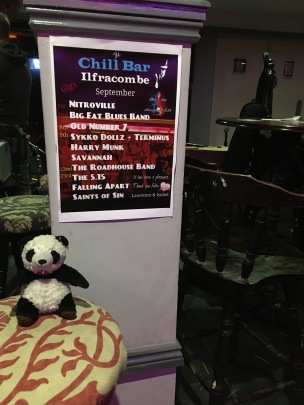 Have you ever lived life on the dirty side of midnight with some salsa dancing pirates? It’s a lot of fun but keep an eye on your bucket and spade. Ilfracombe is not near Oxford so the Terminus camp decided to make a weekend of it. It was a mostly* good journey to the seaside. It’s rare you get a whole car of people who all like fig rolls.

My first sighting of the Chill Bar was when load in happened at 11am. I loved it on first sight and we got a hugely warm welcome from Isabel. After load in Ilfracombe was our oyster. There were arcades, the harbour, a bike rally, pubs and a chocolate emporium. We promenaded and found fun. Helen held a snake, I bought a souvenir teaspoon rest (it’s not all rock ‘n’ roll). In the early evening the Sykko Dollz answered the question “What shall we do with the drunken vocalist?” with “Send him for a snooze until he’s sober”.

The Chill Bar was host to a 30th birthday party for Sophie who dances splendid salsa and it made for a mixed musical evening. It’s not often I hear The Vengaboys, Ken Dodd and Gypsy Pistoleros numbers all in one evening. It’s also not often that I have a pink bucket and spade with me on a Saturday night (thanks Steve and Michelle). I sipped a sex on the beach and looked around me at all the seamen and wenches. Aarrrr! This be a fine hostelry, I thought.

Terminus went on at nine, the pirating hour. Dean had on a double dose of guyliner, one lot for rock singing and a second lot for pirating. His parrot had developed a puncture but luckily Lawrence was on hand to fix it with some gaffa tape. The bar bounced to Terminus’s cover of “All The Small Things”. The salsa dancers did some very fine grind, wiggle, wiggling to Rose Tattoo’s “Sweetmeat”. Heavy Metal Panda got introduced to the crowd and was very excited. As well as dancing there was cutlass waving (only plastic and inflatable ones, no need for alarm) and I waved my pink spade. The set ended with Rage Against The Machine’s sweartastic “Killing In the Name”.

Sykko Dollz gave us a treasure chest of catchy choruses and singalong numbers. I can’t wait until they’ve finished their EP. The crowd sang along, belting out “I win, you lose, should have known better”, “She’s my girl” and “Life ain’t easy when you’re riding all night”. The Abba cover “Does Your Mother Know?” was delivered with a camp tongue in cheekness that had an element of Jack Sparrow to it. A trio of Sykko Clowns came out with shots and kicked the party up a notch. The Dollz ended with a Gypsy Pistoleros song with a chorus that goes “Hey, hey, hey, where did I go wrong? I’m living my life on the dirty side of midnight”.

I like it on the dirty side of midnight…

The gig in brief:

Number of Motörhead T-shirts in venue – 2

Number of salsa dancers in venue – loads of accomplished ones.

*We stopped at Gordano services. I ordered a tuna and sweetcorn six inch sub. The man filled two inches of it and then realised he’d run out of tuna. He offered me other things to complete it but I don’t like tuna with other things. I assume that Gordano services was started by three men called Gordon, Daniel and Noel who were on a mission to serve overpriced food to a wide section of the population in slightly too bright surroundings. There must be a parallel universe somewhere in which three men called Noel, Daniel and Gordon decided service stations should be pleasing and so they opened Onadrog services which is a wonderful place where the food served is tasty, reasonably priced and from the local area and people are fully aware of how much tuna they’ve got.

Anyway, the moral of this story is don’t start a fish based task you can’t finish and if you promise six inches and can only deliver two there will be disappointment.