I’m married to a guitarist who loves Joe Bonamassa so our annual vacation has been the Keeping The Blues Alive at Sea festival for the past two years. I’m way more of a metal fan than a blues fan but I love the festival because I love being around people who love music, on a massive floating luxury hotel, with unlimited ice cream. I even got some heavy metal highlights this year, which shouldn’t surprise me, since metal evolved from the blues.

So, in no particular order, here are my heavy highlights;

It was great to hear Black Country Communion on the pool deck stage and in conversation. I love that Glenn Hughes has chosen deep purple as his trouser colour. I also liked it when he said we’re all on a journey together because we actually were, from Miami to Jamaica, rather than the more metaphorical one he usually means. The last time I saw him I was on a journey from Wolverhampton to Oxford. It wasn’t mystical but I did enjoy Warwick services.

I got to hear a snippet of The Hunter (I know it from Danzig, but it originates from Albert King) during Joe Bonamassa’s Led Zep “How Many More Times” cover on the pool deck stage.

Larkin Poe did an awesome cover of War Pigs  in the cosy Bar City stage on Thursday. Horns were thrown by many members of the audience. I met them in the corridor and they happily posed for a photo with me and made my day.

Toronzo Cannon is not just an amazing story telling blues man from Chicago, he’s also a bit Spinal Tap. During the song Fine Seasoned Woman he talked about a marshmallow test he does to check the lady he’s going to give his attentions to has the cushion for the pushin’. He won’t do the dirty with women under 31 years old, which is quite specific. Also he claims to keep his marshmallows in the fridge.

Finally, the ship is very heavy, it weighs just over 93,500 gross tons, see the Wikipedia entry for the Norwegian Jade here. Its beautiful carpets are worth a mention, the masks one reminds me of Motley Crue’s Theatre Of Pain album cover and the dragons one makes me think of Dio and The Clash. 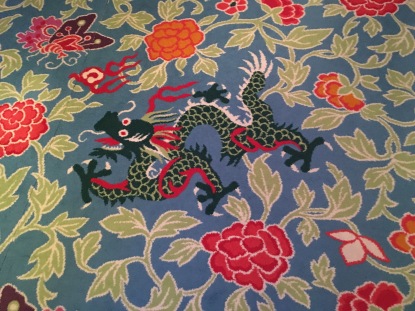