It’s Friday night, I’m leaning against something sticky and vibrating and I’m hoping this doesn’t end too soon. I’m watching the penultimate song of Eric Gales’ set and the sticky vibrating thing is the wall of Nells Jazz And Blues Club, West Kensington. What is a Motörhead T-shirt wearing self-confessed metal head doing in a Jazz (small shudder) and Blues Club? Watching really great guitarists, that’s what. I’ve been excited since I queued in the very friendly queue outside, looking through the window of the Sainsbury’s Local below the venue at some unripe bananas.

Eric Gales gets a lot of Hendrix comparisons and these are well deserved but he’s got a style totally his own. My two favourite songs in his set were Sea of Bad Blood and Voodoo Child (Slight Return) which featured the riff from AC/DC’s Back In Black, something that should be heard every Friday night, across every land. For set list nerds, here’s a link: Eric Gales’ Set List.

I love the stories between Gales’ songs. I love that he tries a British accent and can say “splendid” splendidly. He’s one year clean and he somehow leaves you better than he found you. He plays with such passion in his face, wearing expressions that range from a child trying lemon for the first time, to opening a letter reminding you it’s time for a dental check-up, to a dog eating peanut butter, to one of those sneezes that you think you’re going to do but it vanishes. His honeyed words about his wife LaDonna are charming, she plays percussion with such energy. His bass player, Cody Wright, begins be-hatted and then gets too hot for it and drummer Nick Hay pounds his kit like it’s asked him to be rough with it. Talented musicians all, it’s a pleasure to watch them.

The opening act tonight was Gary Hoey, a chap I have read a little about in Lita Ford’s autobiography and met briefly on the Keeping The Blues Alive At Sea III cruise earlier this year. He’s black T-shirted and tattooed and he has a kind of punky grin at times, fifteen percent Sid Vicious, fifteen percent Billy Idol and seventy percent pure Hoey. My favourite songs in his set were Dust And Bones and Steamroller. For set list nerds, here’s a link: Gary Hoey’s Set List.

I know very little about blues but I do know that songs about trains are important and Hoey ticked that box by giving us Box Car Blues. There was a lot of smiling on stage between Hoey, Matt Scurfield on drums and AJ Pappas on bass. They look to be having a great time and it’s infectious. 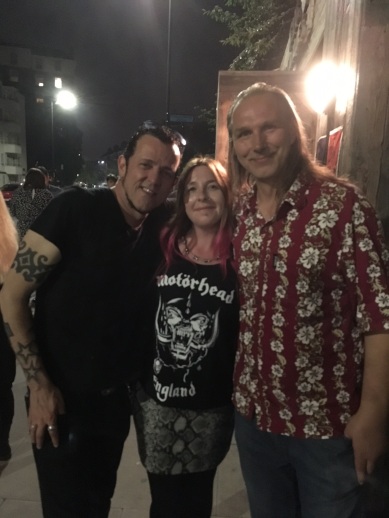 After the gig Gary Hoey was outside and we chatted and had a photo taken. There’s a lot of sweaty happiness in this picture. A big thank you to our chum Steve Betts for taking it, for being persuaded to join us on a night out and for putting up with all the bass player jokes aimed at him. We had a very good curry (and yes, my husband’s floral shirt did match the wallpaper in the Indian Express restaurant), a couple of drinks and we gave our ears a treat. So what if we’re tired tomorrow?

As we left West Kensington I noticed that the bananas in Sainsbury’s had ripened. The music must have drifted through the ceiling and helped them reach their potential. Whoever eats them is unwittingly ingesting a bit of the magic of Hoey and Gales. That’s going to make for a great snack.