Today Terminus tell us what their favourite film is and what song they would like to add to their set but have been scuppered in doing so by at least one of the other members not wanting to play it. 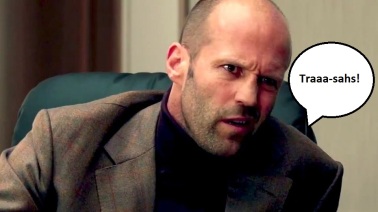 Fun fact – Jason Statham is unable to say the word “trousers” without an air of menace. If you’d like to try saying “trousers” in a hard man way then make a face like you’ve just smelt some gone off milk and pronounce “trousers” as “traaa-sahs”.

Having to all agree on what to play makes being in a covers band interesting. Here’s some songs you’ll not hear Terminus do any time soon due to a lack of consensus:

Steve would like to play Warrant’s Uncle Tom’s Cabin.

Noel would like to play The Carpenters’ We’ve Only Just Begun.

Dean would like to play Manowar’s Thor (the powerhead).

Liam would like to play the Power Rangers Theme song and Pantera’s Cowboys From Hell.

John couldn’t think of one so maybe he always gets his way!