Have you ever listened to AC/DC and thought that their songs seem to fall into one of three categories; songs about sex, songs about gambling and songs about rocking (the importance of)?

Have you then considered going through every one of their studio albums and working out the percentage of each song topic contained within that album?

When you’ve done all 17 albums (17 because you’ve included the two early Australia only albums because if a thing is worth doing it’s worth doing properly) you will reach an amalgamated score and will know if AC/DC are mainly about sex, about gambling or about rocking (the importance of) and this will be satisfying.

Anyway, this is my new project. The first album I’ve looked at is High Voltage (1975) Australia Only Version.

Baby Please Don’t Go – this is a cover, originally by Big Joe Williams and is about sex.

Little Lover – sex, supporting lyrical evidence is all of the lyrics, but for example “The wet patch on your seat, was it Coca Cola?”.

Soul Stripper – sex, supporting lyrical evidence “Then she laid her hand on my lap”.

You Ain’t Got a Hold on Me – sex, supporting lyrical evidence “You can take me to your bedroom”.

Love Song – Love rather than sex, supporting lyrical evidence, “Oh, I’ve got hearts and flowers for you, if you leave me you’ll make me cry”. This is not typical AC/DC lyrical fare.

Show Business – rocking (the importance of), supporting lyrical evidence “You want to roll, you want to rock”. 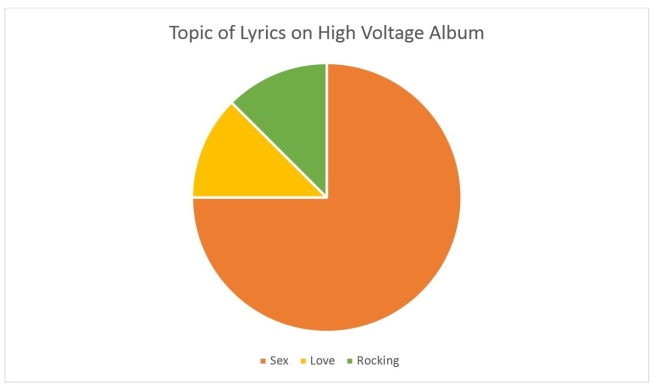 Conclusion – This album is 75% sex, with 12.5% love and 12.5% rocking. It occurs to me that the sex written about could be divided into happy sex where AC/DC are having a nice time with a lovely lady like in “Little Lover” and less happy sex in which it’s complicated, like in “Soul Stripper”. So, to further subdivide High Voltage 1975 Australia Only Version, of the songs about sex, two of them (Soul Stripper and You Ain’t Got a Hold on Me) are about complicated relations while four are more straight forward sounding sex situations (sexuations? no, this is not a good word).

The next album to get my forensic lyrical analysis will be T.N.T. (1975) Australia only. My early prediction is that AC/DC will get less sexy and more focused on rocking (the importance of) over time, but we’ll see.