The next album we’re looking at is The Razors Edge. I got this on cassette for Christmas 1990.  It has twelve songs rather than the ten we’ve been used to (ten makes calculating percentages very easy, I like ten songs on an album).

We’ve got twelve categories of lyrical content to choose from (and if none of these fit we’ll create new ones). Our categories so far are; sex, gambling, rocking (the importance of), love, personal power/ego, crime, loneliness, parties, the human condition, rejection of social norms, alcohol and war.

Fire Your Guns – sex, supporting lyrical evidence “That lady bites, hard style, drips of sex, eyes are wild”. Does anyone else think drips of sex sounds a bit horrible?

Moneytalks – the human condition (we’ve all have the understanding that money provides opportunity and luxury), supporting lyrical evidence “Come on, come on, listen to the moneytalk”.

The Razors Edge – the human condition, lyrically this is a confusing song, seeming to both threaten death with “You’re running out of lives” and to suggest reanimation with “Razors edge, to cut to shreds, to raise the dead”. I personally would have called this album Thunderstruck and made that the title track. A lot of bands tried to be serious in the 90s, but don’t worry, the next song on the album is far from serious.

Mistress for Christmas – sex at the most wonderful time of the year, supporting lyrical evidence “I like female form in minimum dress” and “I want to ride on your reindeer honey and ring the bells”.

Rock Your Heart Out – rocking (the importance of), supporting lyrical evidence “You gotta rock your heart out”. We haven’t had a song about the importance of rocking since For Those About to Rock (We Salute You) four albums ago!

Are You Ready – sex, I think with a prostitute, supporting lyrical evidence “Sweet apple pie, standing in the street” and “She making eyes, at everything she meet, ain’t it a crime”.

Got You by the Balls – sex, again with a prostitute, supporting lyrical evidence “She won’t come across, unless there’s money in her hand”. This song has the puzzling lyric “This one likes to tease, with a special service, in French quantities”. I have no idea what a French quantity is and how it compares to an English one. I’ve just Googled it and found a BBC GCSE Bitesize French Quantities Quiz and had a go and I got 6 out of 10. I now know a bit more about French quantities. They aren’t very sexy.

Shot of Love – love, supporting lyrical evidence “It’s the best shot of your life, shot of love” and “A humping and a bumping till we start a fire”. This song also contains a line I strongly suspect is only included because it’s needed to rhyme with the line after it “I’ll drink some water from a wooden cup. Keep a rocking till the sun comes up”. Keeping a rocking all night long is very AC/DC, but some Adam’s ale from a vessel made of tree is less so but it does rhyme.

Let’s Make It – sex, supporting lyrical evidence “Come on give me some love, you’re driving me wild”.

Goodbye and Good Riddance to Bad Luck, the human condition, we’ve all been down on our luck, supporting lyrical evidence “And I’m down on the game, always in trouble”.

If You Dare – sex, supporting lyrical evidence “Woman won’t you come outside and play”. 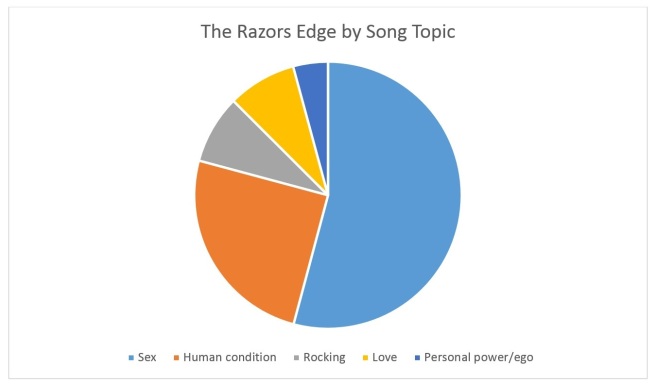 The next album we’ll look at is 1995’s Ballbreaker.